Last night I dreamed of pure joy. On a hillside lived a woman with several children. The gravel drive down off the main road at a slight angle to her home. The gray atmosphere sweated a late summer dampness across the hillside grass. Several abandoned cars lined the flatness where the land began, followed by an overgrown garden of sunflowers and corn, tomatoes and other tall vegetables in an unkempt state.

I seemed to be a wanderer come across a family living at a subsistence level, but happy in their togetherness. There were eight to ten children at least mingled amidst the garden and the cars or the gravel in front of the house. Small girls and boys, lead it seemed by one oldest brother, a teenager at the head of the household.

He regarded me across the gravel drive, perched on the stem of a work tool. Sweat glistened from his brow and we exchanged a taciturn greeting until the woman appeared. She was middle aged but youthful, wearing a light summer dress of rich burgundy with a white pattern and pearl buttons down the front. I could tell at once that she was fit beyond her years, retaining an hourglass figure that pushed against the cotton fabric with round breasts and hips like a tapered ceramic vase.

She motioned for me to enter the house, what could only be described as an Appalachian shack, and at once we were seated at a long rustic table. I sat near the end, across from the oldest son. The food was vast across the table top, and the clatter of flatware on dishes mixed with the conversational din evidenced a strain of happiness that I believe was the quest of my searching.

Satisfied with the bounty of food and drink, I felt relaxed and content, as if my dreaming body had fallen deeper into a period of rest. There was no tension. I felt at ease within the dream, which stood in violent contrast to the realities of my waking life. I’d been unemployed for longer than I care to remember. The financial burdens on my working wife, a librarian, were manageable. But we’d grown the strain of my failure into a facile chasm into which we poured nothingness with ease. I sought escape from the passionless void and had been burdened with longing for days.

Back at the table of dreams the smaller children chattered with laughter. I was pleased with their animated health. The rose colored vitality exuded from their round cheeks and hearty smiles. Across the table, though, the eldest gazed sternly upon me. At once he began to speak.

“You shouldn’t be here,” he said. “You know she likes to be with more than one person at a time.”

I didn’t, or couldn’t in the dream state, reply. But he continued.

“Nettie’s the one you want.”

I have no idea who he’s talking about. I’m a stranger here, having only just arrived. I’m happy to be witness to the childish bliss filling the room. I certainly appreciated the mother’s apparent beauty, but entertained no untoward thoughts as of yet.

At once the room is empty except for the eldest son, who goes on to tell me of many escapades involving his mother. He continues to assure me that I want this Nettie, who I’ve yet to see.

I decide to leave and continue my journey. I’ve been replenished with food and the understanding that happiness does exist below the decaying surface of middle age. My consciousness appreciates the lesson and I believe I can face the morning. I’m searching for the exit and enter a hallway lined with open doors through which pours glass-filtered daylight. A muted bluish-gray emanates from each opening as I step. I realize I see no exit and that this leads to the bedrooms. So I turn but am at once facing the doorway to a bath.

The mother stands in the room with warm water filling a claw-footed porcelain tub. Her face is of timeless beauty. Wisdom and grace flutter from her gray eyes as a pastel hue powdered across her soft cheeks demands my stare. Frozen I cannot move.

She undoes the sundress and it falls to the floor. She steps toward me.

“You let me know what you decide about Nettie,” she says. Gripping my waist she pulls me in.

“There’s nothing to decide.” 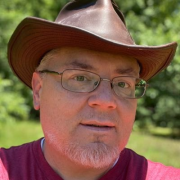