Sanders ripped the finished warrant from the type writer and made his way back to the window. He signed the warrant and separated the triplicate forms into their necessary segments: one for the officer to execute, one for the perp and one for the court file.

He was just finishing the personal information on the blue release form when Stewart brought the man to the other side of the window.

This guy was soft and domestic, you could tell by his plump face and drooping eyes that he was no more streetwise than Theo Hucskstable.

“Mr. Gilmer,” Sanders said, “You are being charged with armed robbery …”

At those words the man collapsed his upper body on the counter across from Sanders, raising his cuffed hands to his round face in sorrow.

“Stand up there and listen to the judge,” he said as he pointed to Sanders through the window.

The man raised his face to Sanders as tears filled the corners of both eyes. As Sanders continued, those tears fell in great drops along his cheeks.

“You are being charged with armed robbery,” Sanders said. The man’s lips quivered.

“Sir, I’m begging you sir. I just needed some money to get milk and diapers for my baby. I don’t know what I was thinking. Sir, I’m sorry, sir,” he said, raising the back of his wrist to wipe the tears from his right cheek.

For once Sanders believed. The facts all added up. He looked at the man. He looked at Stewart, who paused to look up from his half-completed arrest sheet to see that there was an uncertain look in Sanders eyes.

Sanders fidgeted with his pen in his right hand. All he had to do was fill in the bubble with a bond amount and send the man on to the jail. But other thoughts filled Sanders head.

“Please sir, I never been in no trouble,” the man continued.

Suddenly, Stewart slapped the back of the tablet up against the window.

Sanders knew what the officer wanted. He wanted a felony collar with a stiff bond so he could walk the man twenty feet over to the jail intake door, where two jailers in all black stood ready to take the man in.

Stewart wanted to dump the man off with the jailer, hand him the arrest sheet and get back in his vehicle and back to the circle so he could find another perp and get another arrest.

Sanders knew what the man wanted. Or rather what he didn’t want. And Sanders didn’t think the man deserved it either. In the bottom of his stomach Sanders felt a swell of empathy. But there was Stewart, still holding the tablet up to the window and staring a hole right through the glass.

The man collapsed again on the counter and Stewart had to use both hands to hold him up as Sanders said “Bail is set at $5,000” and ripped the top form from the perforated tab and handed it to Stewart.

Stewart nodded to Sanders as he propped the man up and began to lead him across the holding area. 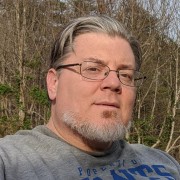